Jamaican Dub Poet, author and Reggae Artiste, Yasus Afari, generously agreed to take part in a Community Tour of Wales supporting Black History Month activities in schools and engaging with communities to share stories. This was organised by Learning Links International. Yasus Afari is founder and promoter of the Jamaica Poetry Festival, which is held annually as part of the event programme in Kingston in August each year,

During his UK wide tours over the past 10 years, Yasus Afari has explored the shared histories of the counties that make up Great Britain and Jamaica with research and workshops for children to create poetry that will build bridges between the different countries. Yasus Afari brought greetings and poems recorded on film from the Principal, Staff and Students from John Austin All Age School in the Pennants community in Clarendon, Jamaica, to schools in the Ogwen Valley, an area owned by the wealthy planation owning Pennant family.

Children at schools in the Ogwen Valley and across Wales have been delighted to learn about Jamaica and their poems express their understanding of the challenges that both countries faced that resulted from oppression by the English, including the imposition of English language and laws. By introducing the Jamaican Heroes, as well as Jamaican symbols and icons, the children were able to respond by sharing stories about Welsh heroes and the Welsh symbols of national pride. 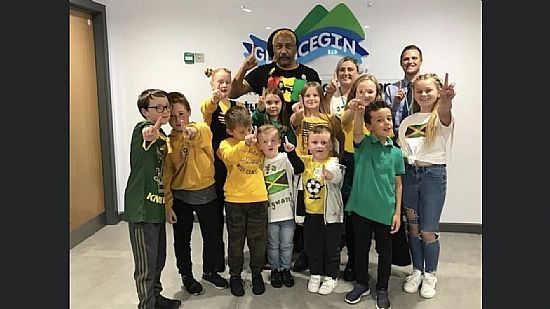 School students also learned about the involvement of Welsh people, as captains of slave ships and as pirates or privateers protecting British shipping, as well as the involvement of Welsh spinners and weavers who produced some of the woollen cloth shipped out of Liverpool, London and Bristol to clothe enslaved people working on the plantations where they cultivated sugar and other products that were so valued back in Britain.

Yasus Afari visited Llanrumney Hall, near Cardiff in South Wales, home of Captain Sir Henry Morgan, the seafarer and pirate who became a buccaneer and then for a time became Governor of Jamaica.

Wales, like all the other parts of Britain, has its own shared history with Africa and the Caribbean, and Welsh plantation owners brought their wealth back to Britain. This wealth was created by the enslaved Africans working without pay or given any human rights. Yasus Afari is skilfully using his poetry to honestly tell these stories and encouraging respect for all people’s today.

Yasus Afari has also linked with community enterprises in Dolgellau, Blaenau Ffestiniog, Bethesda and Llandegai, involving local poets and storytellers to join him in Black History Month events and recognition. As a Rastafarian he linked with Ras Peter Ice and the team at the Bute Town Community Cente in Cardiff on Saturday 2nd November, for an evening of reggae music and ital food, recognising the Anniversary of the Crownation of their Majesties Emperor Haile Selassie and Empress Menen.